Foreign Material Is the Leading Cause of Food Recalls in 2019 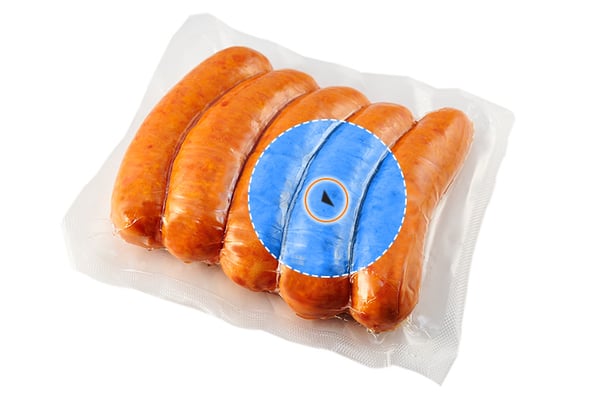 At a time when methods for detecting foreign materials in food is more sophisticated and accurate than ever before, it would seem that the incidents of contamination by physical hazards would be declining.

But greater capabilities to detect particles in food could actually be triggering more recalls, says Chris Keith, VP of Sales, Marketing and Customer Service for FlexXray.

According to information released by the U.S. Department of Agriculture, foreign materials were the leading cause of food contamination during the first half of 2019.

Food Recalls Due to Foreign Materials are on the Rise

Of the 125 total food recalls in 2018, 28 were prompted by physical contaminants. This year, there have already been 93 food recalls, with 22 of them caused by the presence of foreign materials. 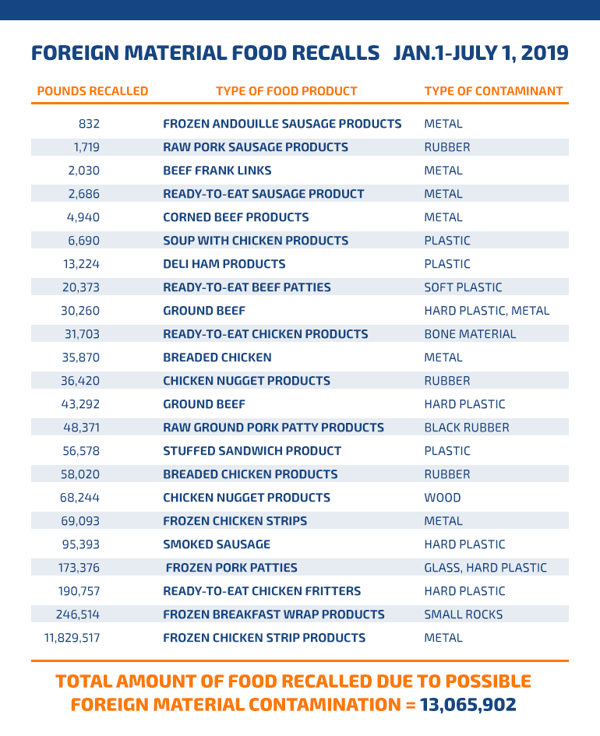 “I think the reason we’re seeing so many recalls is two-fold,” says Keith. “One is that companies are more concerned about what happens to their brand when there are threats of a lawsuit or something goes viral on social media. That’s made them more proactive and attentive; most of the recalls we’ve had this year have been voluntary recalls from the manufacturer.”

The second factor influencing the number of recalls is that food is increasingly becoming more processed. The more machines and processes the food is exposed to, the greater the risk for some sort of contamination.

“You’re always going to have things indigenous to the farming process in food, like rocks and wood or something from the ground. But the types of contamination we’re seeing — rubber, plastic, metal, glass — is not indigenous,” says Keith. “That’s what happens when you’re putting food through machines.”

Where Foreign Contaminants Come From

Metal is the most common contaminant found in food so far this year, something that consumer advocates say is due to the increased automation in meat processing plants. That has contributed to machine parts breaking off and contaminating food. Metal can also end up in food products before the animals are brought to the manufacturing facility for processing.

In addition to metal, many of this year’s recalls have been the result of contamination from both hard and soft forms of plastic. These materials can come from production facilities that use plastic tools and equipment, such as paddles, belting and buckets. Over time, the plastic can wear down, leading to cracks and breakage.

If left undetected, this can lead to bits of plastic breaking off and landing in the food product. In fact, while it takes a back seat to metal this year, plastic was the leading foreign material causing contamination in 2018.

Since foreign contaminants have so many different ways of entering the food supply, the risk of a product being contaminated increases every time a human or machine makes contact with food.

A sharp uptick in contaminated meat and poultry led the USDA’s Food Safety and Inspection Service (FSIS) to roll out new best practice guidelines for meat and poultry producers in March. The new guidelines call for faster response times to consumer complaints of foreign materials in meat and poultry, emphasizing that manufacturers should report incidents to the FSIS within 24 hours of determining the product contains contaminants.

“When society insists on more processed food, which is what is happening now, the manufacturing lines have to move faster to keep up with demand,” Keith explains. “And how is the human eye going to catch something if it’s flying by them on an assembly line? You can’t. This is putting incredible demands on food companies.”

That demand will only continue to increase, and Keith says he expects we’ll continue seeing more recalls — but that indicates that food companies are doing their part to keep consumers safe.

“There is so much in our processed food production that can fail,” Keith says. “Companies have to really be on top of routine maintenance to see where machines are breaking down, because machines will always eventually fail. And I think most companies are on top of what’s going on, which is why we’re seeing so many more recalls.”

Solving the Problem Before it Begins

One of the most effective ways to prevent recalls, lawsuits and the accompanying damage they do to a brand is through X-ray inspection of food before it is distributed. Although food manufacturers have systems in place to flag contaminated product, not all detection systems will locate all types of contaminants.

While metal detectors can be effective in identifying metal particles, if the product is contaminated with some other type of foreign material — such as plastic, glass, rubber or bone — the metal detector won’t find it. Metal detectors also aren’t able to inspect products in aluminum-coated packing materials.

Even companies with an inline X-ray inspection machine find themselves facing the challenge of having to keep up with the speed of the manufacturing line, which means the machines are not consistently able to detect objects that are smaller than 3 to 5mm in size.

FlexXray’s custom medical-grade technology has the ability to detect foreign particles as small as 0.8mm. Because FlexXray specializes in food inspection, the product is moved more slowly through the X-ray machine and, when a line technician notices a change in shading or density, they can stop the line and zoom in on the area in question.

If the area turns out to be a foreign material, the product is removed from the line for safe and proper disposal, and then the rest of the production run is inspected to ensure there aren’t any other contaminants.

Once that’s confirmed, the safe, inspected food can reenter the supply chain and be shipped to wholesalers or customers.

“Because we have better technology and equipment today, the food industry as a whole is better prepared to find foreign contaminants,” Keith says. “Traceability allows for voluntary recalls before anyone is harmed. We’re getting a lot tighter and a lot better at keeping contaminated food from ever being distributed.”