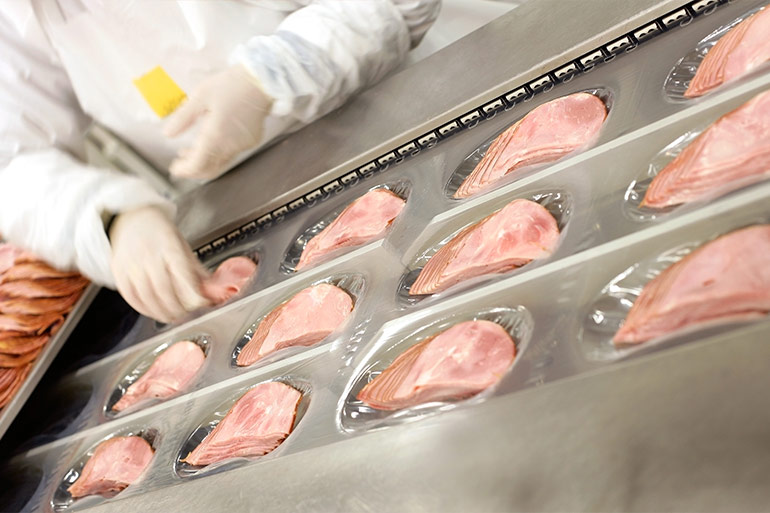 Recent changes to regulations affecting line speed in meat plants have raised concerns about meat safety. These changes potentially add new dangers for food producers who are purchasing the meat, since many believe it will dramatically raise the risk of contaminated food entering our supply chain. Under these new regulations, plant managers will have more control over inspections, and many federal inspectors will be replaced with plant employees.

Last September, the U.S. Department of Agriculture’s Food Safety and Inspection Service (FSIS) published a notice that it would allow certain poultry producers to increase line speeds to 175 birds per minute, up from the current line speed that capped at 140 birds per minute. To do so, plant operators must meet certain criteria, such as a history of regulatory compliance, being able to prove that they had the proper equipment, procedures and technologies in place that would allow for faster line speeds without compromising safety and being able to provide documentation that the increased line speed would not affect employee safety or interfere with inspection procedures.

The move to increase the line speed was controversial, especially given that the poultry industry has a high rate of workplace injury — even higher than construction, landscaping and sawmill worksites. Opponents of the measure to increase line speed have voiced concern that it could expose workers to even more injuries and illness.

On the heels of that move, recently proposed legislation would shift the power of safety inspections in hog processing plants from federal employees to plant workers. The new inspection system would give plant owners the final say in determining how much training it would provide to employees, including those with the responsibility for identifying diseased and contaminated pork.

In the past, that responsibility fell to trained USDA veterinarians, who could identify such contagious diseases as foot-and-mouth disease. Additionally, plants will no longer have to test for E. coli, nor are there any regulations requiring testing for salmonella, which the USDA was responsible for testing for in the past.

Instead, plant owners will provide USDA inspectors with pathogen testing results, which do not have to be made public.

With increased line production speeds for both the poultry and pork industries and inspections being handed over to plant employees, the Department of Agriculture is now set to begin discussions about shifting beef inspections to workers as well, according to the Washington Post.

There has been further demand as a result of the African swine fever that is sickening China’s hog industry and driving prices higher as U.S. pork producers work to fill the void. An analyst at J.P. Morgan predicts that the virus, which has not yet been contained, is going to continue to create a crisis in China for at least 20 months, so the increased demand for pork from the U.S. is expected to continue at least into 2020.

Beef producers also stand to fare well in coming months as the USDA predicts that American consumers will continue eating more beef; currently the U.S. eats 8.9% more beef than it did in 2015.

While much of the concern about increased line speeds comes from fears of contaminated pork, beef or poultry slipping unnoticed into the food supply, a faster line speed brings other risks as well. Not all contamination comes from bacteria and disease. In fact, the USDA reports that there were 28 major food recalls in 2018 as the result of contamination by foreign materials.

Pound for pound, more food is recalled due to physical contaminants than biological ones. Foreign material contamination can occur at any stage of the food manufacturing process. It can occur during the harvesting process with plants or in processing facilities with meat.

Among the more common contaminants found in meat are buckshot, needles, stones (in poultry), bone, rubber, plastic and wood. These materials have many different ways of entering the food supply, and every time a human or machine touches food, it increases the risk of that product becoming contaminated.

While inline equipment can flag product runs that show the presence of foreign material, it’s limited by the speed of the production line and often cannot catch materials smaller than 3 to 5mm.

At FlexXray, our medical-grade technology can detect particles down to 0.8mm — or even smaller, in some cases. Manufacturing lines move quickly, and managers can’t afford to have their lines slowed down for quality control practices. Using FlexXray’s foreign material detection as part of your final line of defense ensures that a clean product is delivered to your consumers… every time.

As line speeds increase, so do concerns that contaminants will slip into our food supply. Using proper inspection techniques on the line is the only sure way to know that your product is 100% safe and free of foreign materials.